There is a high probability that Atlantic cod will be locally extinct in the southern Gulf of St. Lawrence by mid-century — even with no commercial fishing, according to a new report.

The paper, published in the Canadian Journal of Fisheries and Aquatic Sciences, says the death rate now stands at 50 per cent for adult Gulf cod five years and older.

“That high a natural mortality is not sustainable,” says Doug Swain, a federal Fisheries Department scientist who co-authored the study.

Why recovery has failed for cod

Swain says this stock is particularly vulnerable because it tends to gather in the same places every year.

That includes predictable patterns of migration, spawning and overwintering in dense congregations off Cape Breton in numbers still large enough to attract grey seals that eat them.

Samples showed adult cod made up a large part of the grey seal diet in the overwintering area off St. Paul’s Island, Cape Breton.

Swain and other researchers used models to predict what that could mean for the future of this cod population.

“In these projections, if we assume natural mortality were to stay where it is now and there was no fishing, then cod would be gone by middle of the century,” he says.

“There is nothing to say it will stay where it is but if it is due to predation by grey seals and they continue to prey on cod like they are now, then there is no way this population recovers and it may decline to negligible levels.” 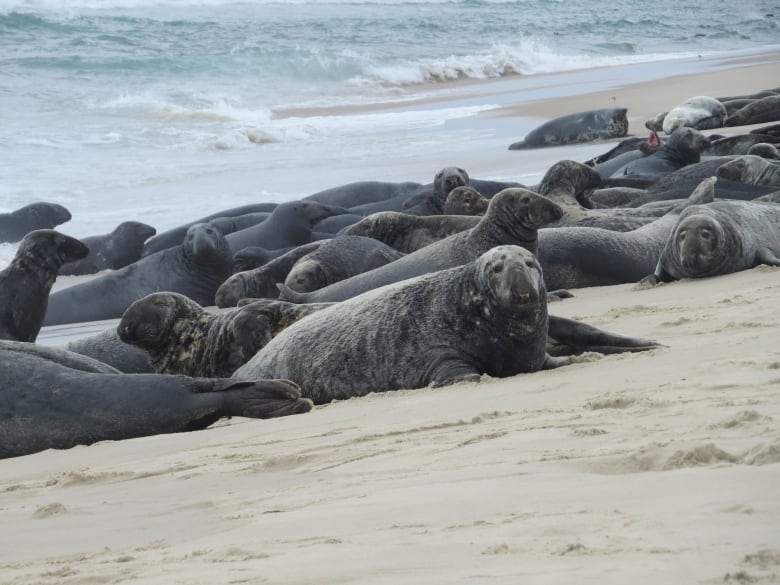 The research found grey seals are likely responsible for an unsustainable rate of mortality among adult cod in the southern Gulf of St. Lawrence. The seals pictured here belong to the Sable Island herd. (Sarah Medill/University of Saskatchewan)

Swain, who is based at DFO’s Gulf Fisheries Centre in Moncton, N.B., has spent years looking at why the southern Gulf cod population has not recovered since the epic groundfish collapse in Eastern Canada in the late ’80s and early ’90s.

Not only did the stock not rebuild, the natural death rate increased to unprecedented levels.

Researchers looked at 10 hypotheses for an explanation, including fish health, environmental conditions, unreported fishing and the possibility cod simply left the area.

“Since the late ’90s none of the other hypotheses really had support except for the possibility the high natural mortality is due to predation by grey seals,” says Swain.

The Gulf grey seal population grew to 100,000 in 2014 from about 8,000 in 1960. In summer, they gather everywhere from Nova Scotia’s Pictou Island to the Magdalen Islands of Quebec.

The Sable Island population has also increased dramatically. That herd is now estimated at 400,000 individuals.

The eastern Scotian Shelf cod population near Sable Island also has not recovered and adults have an even higher death rate, though the report does not directly link their mortality with seals.

‘They won’t always bounce back’

Dalhousie University biologist Jeff Hutchings says the downward spiral facing Gulf cod is a good example of what can happen to an overfished species.

“When we deplete fish stocks to very low levels, they won’t always bounce back or rebuild if we stop fishing them.”

Swain agrees. He says society will have to decide whether to intervene to reduce seal numbers or accept that Gulf cod will not recover.

“The ecosystem isn’t going to change if we leave it like it is now. If nature is allowed to run its course, it’s not going to return to the balanced level it was 150 years ago.”

But Hutchings says even a seal cull would not guarantee a cod comeback.

“And we simply don’t have enough information to draw any scientifically legitimate and defensible conclusions about what a cull of grey seals would do to cod.”

Post Views: 436
Want To Change Your Life? Start Earning Up To $5,000 Per Week After Watching This Video. Click Here!
Related Topics:
Up Next

Why China is the country to watch in space