For the first time in 4½ years, a healthy adult Atlantic whitefish has been discovered in its lone refuge outside Bridgewater, N.S.

The critically endangered relative of the Atlantic salmon — a 33-centimetre female — was found in a fish trap on Dec. 7, ending a worrisome drought.

“It’s the first adult whitefish we’ve seen since 2014. So it was a very exciting day,” said Andrew Breen of the Bluenose Coastal Action Foundation.

No adults had been seen alive since the arrival of chain pickerel, a voracious invasive species that has become established in two of the three lakes that make up the Petite Riviere watershed — the only place on the planet where the Atlantic whitefish survives.

“With a species at risk like this, endangered as it is, seeing any of them is significant,” said Jeremy Broome, a biologist with the Department of Fisheries and Oceans.

A hunch pays off

The rotary screw trap where the fish was captured has never been in the water this late in the year, but Breen was playing a hunch.

The trap is below the Milipsigate Lake dam which flows into Hebb Lake. It’s an area where small numbers of juvenile whitefish have been captured in the spring — a sign that some adults have survived to spawn. 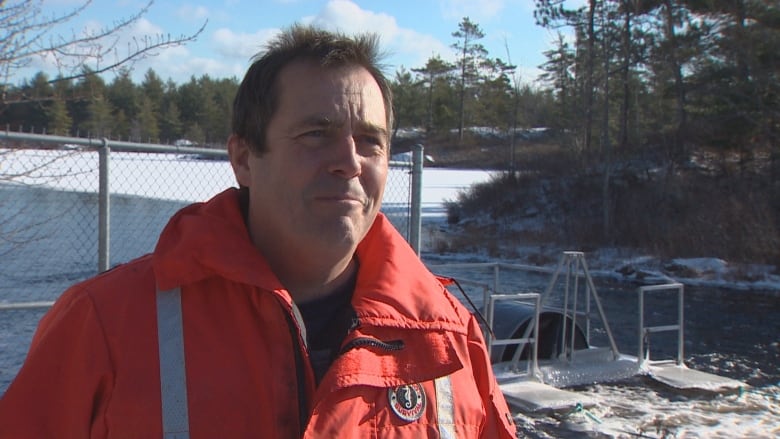 Breen left the trap in the water long enough to coincide with the whitefish spawning season.

“I always thought there was a good chance there would be fish in this area at this time of year and when I opened it up, I had this massive smile on my face.”

The fish was quickly released after a scale sample was taken.

Where did it come from?

Broome said the discovery raises more questions than it answers.

“We don’t know where this fish was going. We know this is when they spawn. We know there are other adults out there because we see larval and juveniles,” he said. 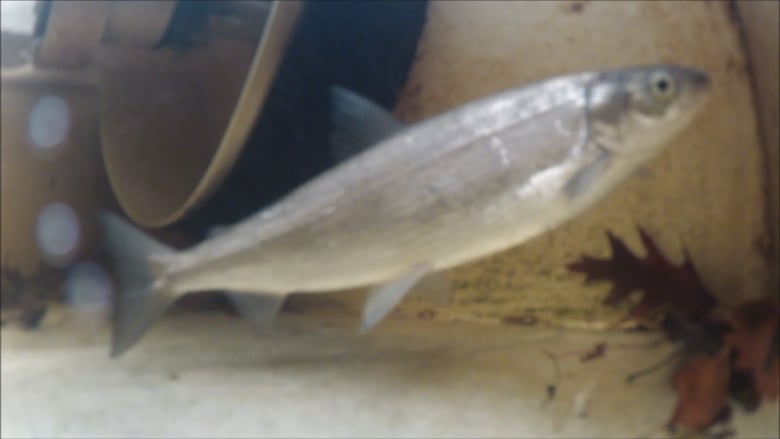 The 33-centimetre female Atlantic whitefish was found in a fish trap on Dec. 7. (CBC)

This week Broome and Breen have been installing cameras to see if they can find more adults near the trap.

“We’re interested to see is this a one-off, or is there a group of other fish following behind? We don’t know which of the lakes this fish originated from,” said Broome.

“Did it fall from Milipsigate into Hebb or did it come from Hebb trying to get access upstream? These are the questions we don’t really know.”

In July, a dead adult Atlantic whitefish was found on Minamkeak Lake — the only lake in the watershed free from pickerel.

Bluenose Coastal Action has operated a rotary screw trap in the Petite Riviere watershed for six years without ever capturing an adult.

“Which suggests there aren’t very many of these Atlantic whitefish left,” said Amanda Lavers of the Mersey Tobeatic Research Institute.

“But it’s a hopeful sign. It’s a sign that if we put some more work into recovery, we can recover this species so it doesn’t go extinct.”

The Department of Fisheries and Oceans has resisted calls to reinstate an Atlantic whitefish captive breeding program killed by the Harper government.

DFO argues there is no point to a captive breeding program if there is no safe place to release fish it produces.

Meanwhile the number of juveniles being seen each spring in the Petite Riviere watershed has been dwindling.

This year, 28 were recovered and taken to the federal fish hatchery at Coldbrook, N.S. Three died.

DFO was going to release them back into the wild this fall but in early October accepted an offer from Dalhousie University to put them in its aquatron tank.

That transfer has not yet taken place awaiting finalization of necessary permits for species at risk.

Finalized permits are expected within the week, DFO spokesperson Stephen Bornais said in an email.

Post Views: 454
Want To Change Your Life? Start Earning Up To $5,000 Per Week After Watching This Video. Click Here!
Related Topics:Atlantichealthywhitefish
Up Next

2-wheelin’ with a tree: Cyclists put spin on Christmas tradition