Kelly Smith’s partner thought he was having a heart attack.

With heavy chest pains and a hereditary heart condition, he needed medical help — but when he called 911 on his Samsung Galaxy, the call wouldn’t connect.

His anxiety spiked, said Smith, as he tried again and again to connect but couldn’t get through.

Smith then grabbed her cell phone, also a Samsung, and frantically dialled 911.

“I tried to call four more times on mine,” said Smith, but she couldn’t connect. 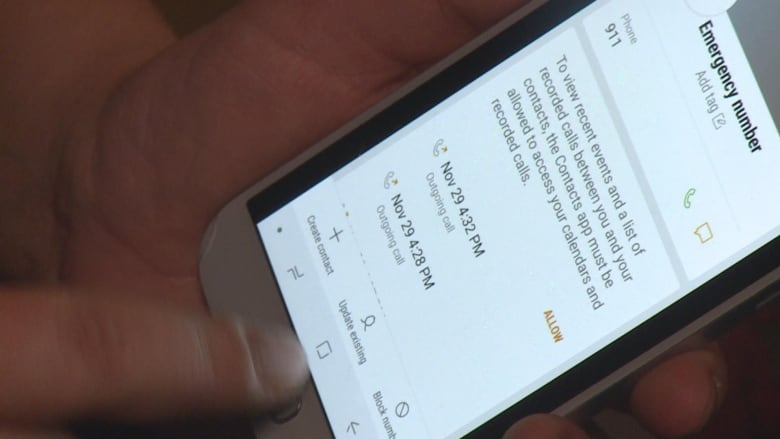 Smith says the attempts to connect with 911 from her partner’s phone started at 4:25 p.m. on Nov. 29, nearly a week before Freedom Mobile sent out a warning. (Chris Ensing/CBC)

Both were using Samsung Galaxy phones, Smith an A5 and her partner an A8, both with service through Freedom Mobile.

“We didn’t even receive a dial tone. It just kept automatically disconnecting when we called 911,” said Smith, who eventually connected with paramedics by calling 411.

“Thankfully we were lucky and everything was okay. But 10 minutes, 15 minutes trying to get a hold of an ambulance, that could be a lot,” said Smith, who was worried her partner could have a heart attack.

Smith’s partner eventually made it to the hospital. He was recovering days later when Smith received an alert from Freedom Mobile, warning her about a known issue affecting Samsung Galaxy A5 devices dialling 911.

The government body that regulates the 911 telecommunications network said it was “recently made aware of issues” with the Samsung Galaxy A5 devices on Freedom Mobile’s network trying to connect with 911.

“In this case, 911 functionality appears to have been impacted by a software update related to the handset itself and made subsequent to the phone being certified or tested by carriers,” said a spokesperson for Canadian Radio-television and Telecommunications Commission (CRTC) in a written statement.

The CRTC has contacted other Canadian wireless carriers and believes the problem is limited to Freedom Mobile subscribers using a Samsung Galaxy A5. The spokesperson said effective access to emergency services is “critical” and CTRC is monitoring the situation until it’s resolved.

“Handset manufacturers are ultimately responsible to ensure their software updates do not corrupt the functionality of their phone,” said the spokesperson.

Smith reached out to Samsung after receiving the mobile alert from Freedom Mobile to see why exactly her phone wouldn’t connect with 911.

“Samsung told me maybe I should have replaced my SIM card and tried again or called someone else to call 911 on my behalf,” said Smith, who said the failed calls have left her “frightened” over the next call.

“For some people it could have been a life or death moment and we deserve better than this.” 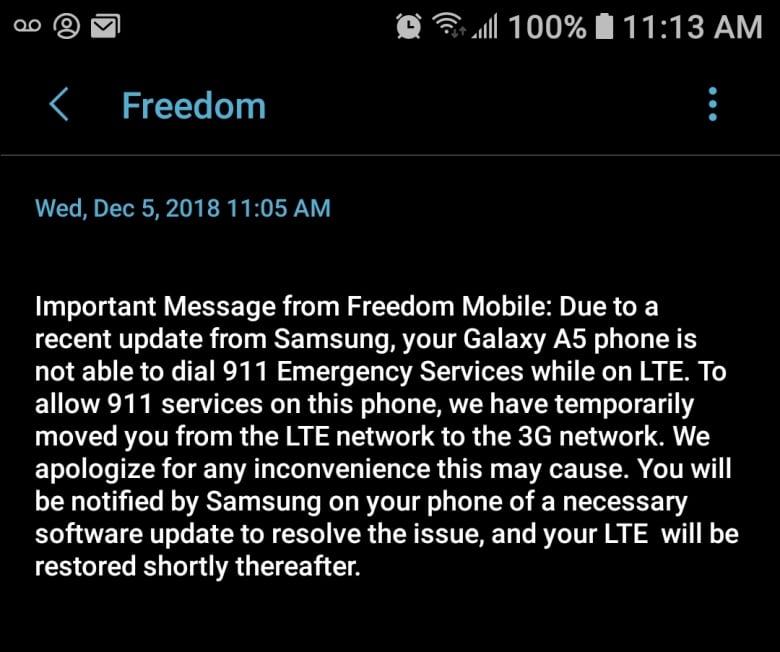 Kelly Smith says she received this text from Freedom Mobile a week after she couldn’t connect with 911.

In a written statement, a spokesperson for Samsung Canada said customer safety is their “top priority.”

“As a result of a recent Samsung Canada A5 device update issue, Freedom Mobile customers who have an A5 device were temporarily moved to Freedom’s 3G network to restore access to 911 emergency services,” the statement continued, adding that it was a temporary measure.

“Customers have been notified of the necessary software update, which is currently available, to resolve the issue and restore access to LTE service.”

After sharing her story with CBC Windsor, Samsung contacted Smith and set up a meeting with a technician who would travel to Windsor from Mississauga.

The technician looked at the phones and took photos of the settings and call logs, said Smith.

“He offered to buy us a new phone case or something,” said Smith, who took him up on the offer.

An executive later called Smith to let her know they would send her two new phones free of charge to replace the devices that failed, which she accepted.

“By them trying to offer us and give us these gifts it’s definitely an admission of guilt and they’re trying to keep us as happy as possible because they realize the severity of the situation,” said Smith.

She believes Samsung needs to make the public aware of the problem.

“They have not released any public statements that I’m aware of stating that this was a major issue, I apologize, here’s the resolution,” said Smith.

She did receive a software update on her phone Saturday through Samsung that included “further improvements to performance including 911 service in LTE coverage areas.”

Despite the promise of an improved service, Smith isn’t confident that her next call to 911 will connect.

“I hope I get through, but now for the rest of my life I will doubt that my 911 call will go through.”

Post Views: 467
Want To Change Your Life? Start Earning Up To $5,000 Per Week After Watching This Video. Click Here!
Related Topics:ConnectCouplefailFreedomfrightenedMobilePhonesSamsung
Up Next

Post Views: 877
Want To Change Your Life? Start Earning Up To $5,000 Per Week After Watching This Video. Click Here!
Continue Reading

Post Views: 5,416
Want To Change Your Life? Start Earning Up To $5,000 Per Week After Watching This Video. Click Here!
Continue Reading

Post Views: 551
Want To Change Your Life? Start Earning Up To $5,000 Per Week After Watching This Video. Click Here!
Continue Reading