As a boy, the shores of Parrsboro, N.S., became Eldon George’s world. He would eventually help bring the world to Parrsboro’s shores.

George, a renowned rockhound whose enthusiasm for fossils and minerals earned him international recognition, died Thursday surrounded by family and friends. He was 87.

Rod Tyson, who chairs the Cumberland Geological Society, described George as a raconteur who always enjoyed talking to people. He was a kid at heart who loved to find minerals and fossils and loved even more learning about those finds and sharing them with others.

A promoter of Parrsboro

The amateur geologist, credited with finding the world’s smallest dinosaur tracks in 1984, first took up the practice as a boy. After a traumatic injury to his right arm, George’s mother encouraged him to paint and collect shells.

But it was the discovery of a fossil when he was nine that would spark a passion that burned bright in George for the rest of his life.

For almost 60 years, his Parrsboro Rock and Mineral Shop and Museum, which he operated with his wife, Elaine, helped draw major scientists and scientists at heart to the area.

When the distinctive brown building with the green dinosaur outside closed a few years ago, George donated its 1,500 fossils to the Fundy Geological Museum down the road. 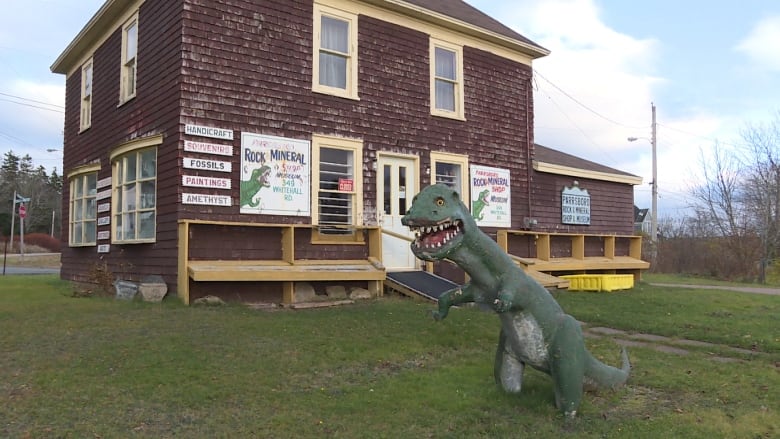 During his near 60 years of running his rock shop, Eldon George managed to fill it with 1,500 fossils. (Stephanie vanKampen/CBC)

George’s efforts to promote tourism in the region were recognized multiple times by the provincial government.

Tim Fedak, interim curator of geology for the Nova Scotia Museum, got to know George as he did his own research along Parrsboro’s famed cliffs and during his time as director of the Fundy Geological Museum.

Since 2015, Fedak has also worked on the Rock Shop Project, documenting George’s collection for the museum.

George’s passion and interest in geology was instrumental in getting the local community to recognize the value of the minerals and fossils in the area, said Fedak.

His efforts were central to the creation of the Cumberland Geological Society and Fundy Geological Museum, and he was part of the group that created the Rockhound Roundup in 1966, which would eventually become the Nova Scotia Gem and Mineral Show.

“That’s a major accomplishment to have an earth science museum in a small town like this,” said Tyson.

While George, who was named to the Order of Nova Scotia in 2013, was a citizen scientist, Fedak said his passion to understand what he was finding helped him develop a sophisticated way of looking at things.

“He would start to construct in his mind what the ancient ecosystem was for that area and he would start looking for things that he would expect to be there.”

But it’s not the accolades that stand out the most to Fedak.

“His smile and the way he would reach out to children and adults and how much he has inspired other people to become interested in geology, that’s what I’ll remember him by.”

Post Views: 430
Want To Change Your Life? Start Earning Up To $5,000 Per Week After Watching This Video. Click Here!
Related Topics:diesEldonFamedfossilGeorgehunterParrsboro
Up Next

Post Views: 5,407
Want To Change Your Life? Start Earning Up To $5,000 Per Week After Watching This Video. Click Here!
Continue Reading