The faint smell of cigarette smoke wafted through the air at the Bear Claw Casino in White Bear, Sask., some 200 kilometres southeast of Regina.

On this late November day, the dinging and jingles coming from slot machines were interrupted by the sound of virtual firefights coming from flatscreen TVs. A crowd gathered to watch as people competed in a Fortnite Battle Royale tournament.

Fortnite is a free-to-play video game that pits players against 99 others on a simulated island with the objective of being the last person standing. Created in 2017, the game boasts a community of more than 125 million players worldwide.

Last Saturday’s tournament at White Bear was a collaboration between Treaty 4 Esports and the Bear Claw Casino. Players competed for cash prizes. The winner walked away with $2,000. 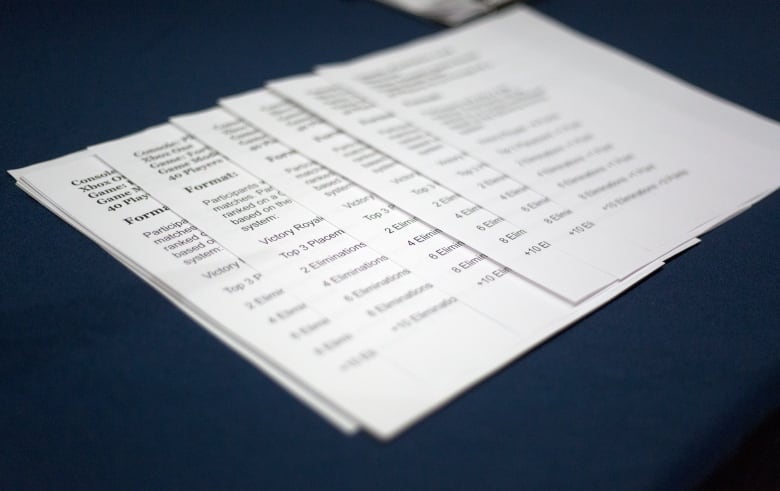 Because of the solo player format Keshane and Severight-Lerat used in their tournament, they had to devise a scoring method that was appropriate for their event. Players earned points based on how many players they eliminated and where they finished in the overall leader board once they were eliminated from the competition. (Bryan Eneas/CBC News)

Tristan Keshane and Shenika Severight-Lerat started Treaty 4 Esports earlier this year in an effort to build an Indigenous gaming community in Saskatchewan.

“I see a need for esports in this general area,” Keshane said. “There’s kids who literally spend all of their free time playing video games when they’re not in school, and that’s what they look forward to.” 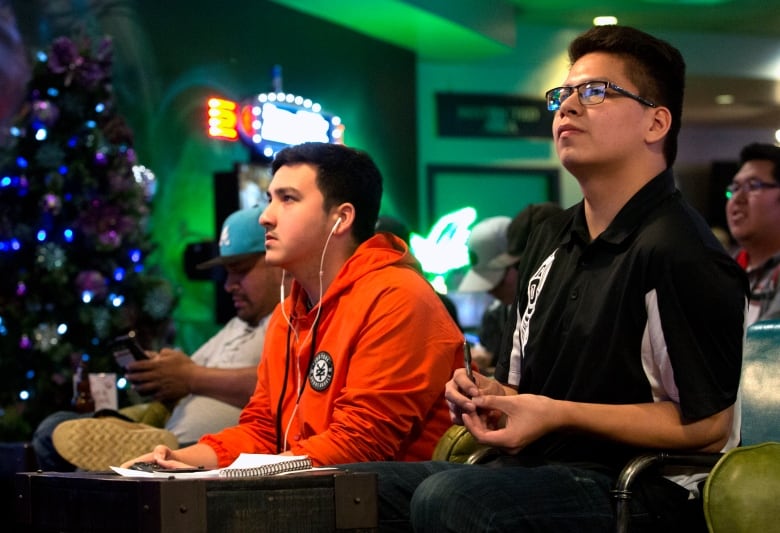 Keshane (right) and Severight-Lerat (not pictured) started Treaty 4 Esports in the summer of 2018.

Keshane said the couple wanted to show youth the possible career paths that could stem from the esports industry in a respectful and competitive way.

“A lot of kids don’t play sports nowadays and a lot of people try to paint a bad picture of playing video games,” Severight-Lerat said. “I see it as an outlet for kids, a positive outlet. They can sit at home and play games and not get into trouble.”

The pair have hosted tournaments for Fortnite and other games online and at three venues in Saskatchewan.

Ashton Lonethunder started playing Fortnite 11 months ago. The tournament was his first time competing in such an event.

“It’s heartwarming to know that people are coming here not just for the game or to compete in tournaments,” Lonethunder said. “[They’re here] to have fun; it’s not only for the game — it’s just having fun in Fortnite.”

‘They finally just accepted it’

“When it first began, my parents didn’t really support it — they didn’t see it as legitimate.”

He first picked up a controller competitively 10 years ago. He would go on to place third in a national Call of Duty tournament in 2016, earning $3,500.

He said his parents now support his esports dreams, as long as they take him in a positive direction.

Severight-Lerat said her parents were also originally sceptical of esports.

“They don’t really know too much about the esports industry and the whole community in itself,” she said. “They finally just accepted it when they started seeing the progress it was making.”

‘I wanted to give back’

Keshane first started talking about building a gaming community when he and Severight-Lerat moved away from their parents’ homes to Yorkton, Sask.

After a few years of talk, they dove headfirst into creating Treaty 4 Esports. Keshane said it’s a way to give back for the support he’s received in his own ventures.

“There’s a lot of people who supported me in my area — there’s fundraisers that were done for me to go to events — and I wanted to give back to the people who have supported me to chase my dreams and hopefully inspire kids to chase theirs, whatever it is.” 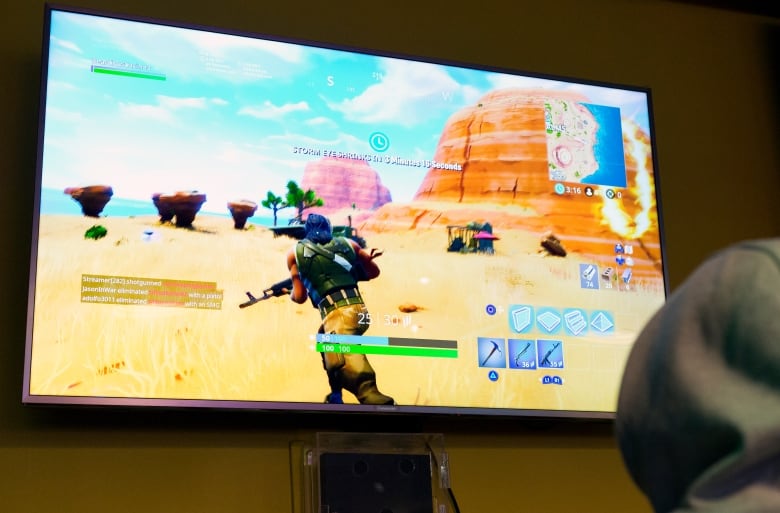 Players from across Saskatchewan gathered at the Bear Claw Casino in White Bear to participate in a Fortnite tournament hosted there on Nov. 24. (Bryan Eneas/CBC News)

Keshane is attending courses through the First Nations University of Canada to get a better grasp of the business side of things to take Treaty 4 Esports to the next level.

But he said he’ll be taking a break from his studies next semester in an effort to grow the community in schools around southern Saskatchewan.

While the casino event was a success, Keshane and Severight-Lerat say it’s the younger generation they ultimately want to connect with.

Keshane said he also hoped to see Treaty 4 Esports organizing events in schools, which would reward students for academic achievements.

Post Views: 313
Want To Change Your Life? Start Earning Up To $5,000 Per Week After Watching This Video. Click Here!
Related Topics:
Up Next

Post Views: 5,590
Want To Change Your Life? Start Earning Up To $5,000 Per Week After Watching This Video. Click Here!
Continue Reading