When Canadian astronaut David Saint-Jacques blasts into orbit next week atop a Russian rocket, his family back on Earth will be getting help from the highest level of the Canadian government.

Gov. Gen. Julie Payette, a former astronaut who last travelled into orbit on the space shuttle Endeavour in 2009, plans to visit the Russian launch facility in Baikonur, Kazakhstan for Saint-Jacques’s liftoff on Dec. 3.

Canadian officials familiar with the visit say in addition to representing Canada as head of state, Payette will also have a formal role as Saint-Jacques’s Casualty Assistance Calls Officer. The role typically involves liaising between the astronaut’s family and different governments in the event of any problems on launch day.

Saint-Jacques, 48, is married with three children.

The Prime Minister’s Office is expected to release more details about Payette’s trip on Monday.

Payette was appointed governor general in July 2017, but her role helping the family pre-dates the appointment, according to one Canadian official.

Saint-Jacques’s launch to the International Space Station — his first space voyage — is set for 6:30 a.m. ET on Dec. 3.

He will serve as the Soyuz co-pilot for the three-person mission alongside Russian mission commander Oleg Kononenko and American astronaut Anne McClain. He will also serve as the crew’s doctor on board the ISS during a six-and-a-half-month stay. 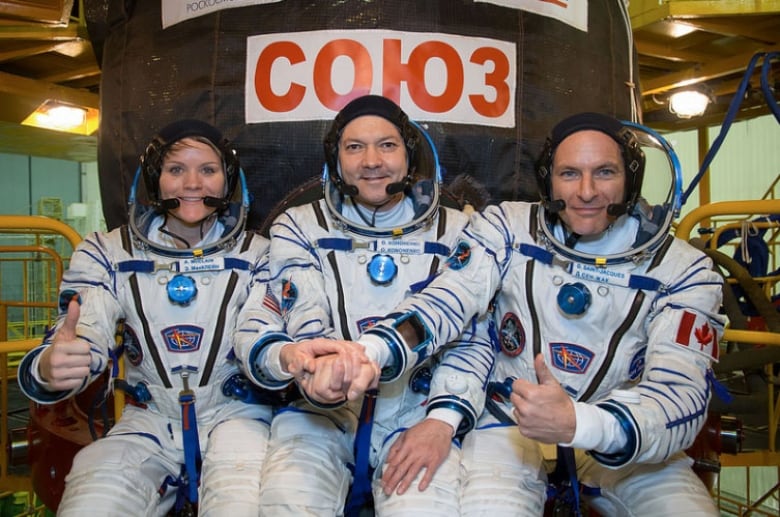 From the left, NASA astronaut Anne McClain, cosmonaut Oleg Kononenko and the Canadian Space Agency’s David Saint-Jacques will blast off in the Soyuz MS-11 spacecraft from the Baikonur Cosmodrome in Kazakhstan for a six-and-a-half month mission on the International Space Station. (NASA)

Russia leases a Soviet-era facility in central Kazakhstan to launch its manned missions to the International Space Station.

Since the end of the U.S. Space Shuttle program, Russian spacecraft have been the only way to get to the ISS and dozens of astronauts of different nationalities, including Canadian Chris Hadfield, have made the trip.

Payette’s attendance at the launch is unusual in several aspects.

Russia’s takeover of Crimea in 2014 and its ongoing military involvement in separatist areas of eastern Ukraine have sent Canadian relations with Russia into a deep freeze.

Official contact between senior members of Canada’s government and Russia have been practically non-existent in recent years.

One of the Canadian officials told CBC News that no direct talks between Payette and any Russian representatives are planned in Baikonur, although there will be an official two-day visit to Kazakhstan following the launch. 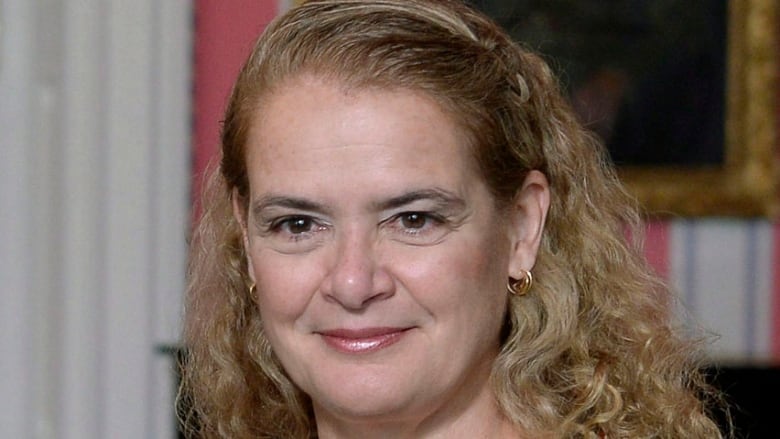 Julie Payette became Canada’s 29th governor general in October 2017. She was selected to be an astronaut by the Canadian Space Agency in 1992 and first boarded the ISS in 1999 to take part in an assembly mission. (Justin Tang/Canadian Press)

Payette’s status as a former astronaut and a member of a very small group of Canadians to fly in space is also significant. The hope is that her presence can help focus public attention on Canada’s role in space, said the official.

Saint-Jacques will be the 10th Canadian to travel to space.

While Russia’s vintage Soyuz program has proven reliable and safe for those flying to the ISS, the last mission on Oct. 11 ended in failure, forcing NASA astronaut Nick Hague and Russian cosmonaut Alexei Ovchinin to make an emergency landing. The pair were shaken but unharmed.

Saint-Jacques, Kononenko and McClain had originally been scheduled to blast off on Dec. 20, but the mission was moved up following the failed launch.

Investigators with NASA and Roscosmos have spent the last two months trying to solve the problem and ensure this launch is uneventful.

Post Views: 320
Want To Change Your Life? Start Earning Up To $5,000 Per Week After Watching This Video. Click Here!
Related Topics:
Up Next