It seems the stereotype that Canadians tend to be more positive and polite than Americans is true âÂ at least when it comes to language use onÂ Twitter. Sorry!Â

A new study published by McMaster University researchers Wednesday analyzed nearly 40 million tweets from both countries including some from Donald Trump around the time of his campaign to become the Republican nominee for president.

While the teamÂ found the vast majority (99.66 per cent) of words, emojis and emoticons were not drastically different, a list of wordsÂ which were typed out most disproportionatelyÂ by Twitter users in Canada andÂ our neighbours to the south shows a distinct difference in tone.

After compiling lists of those words theÂ linguistics expertsÂ had study participantsÂ evaluate the wordsÂ and determine what they think the personality of the person who used them would be.

Maybe … being Canadian is something we do and one way we do it is through our language choices.– Bryor Snefjella , linguistics expert

The result? National stereotypes seem to be connectedÂ â at least in partâ to the words people use online. Researchers found Canadians tend to be nice, while Americans are more negative and assertive.

“What you get back out of that is a really, really accurate recreation of the national character stereotypes,” explained Bryor Snefjella, a PhDÂ candidate in the school’s department of linguistics and languages and lead author of the study. 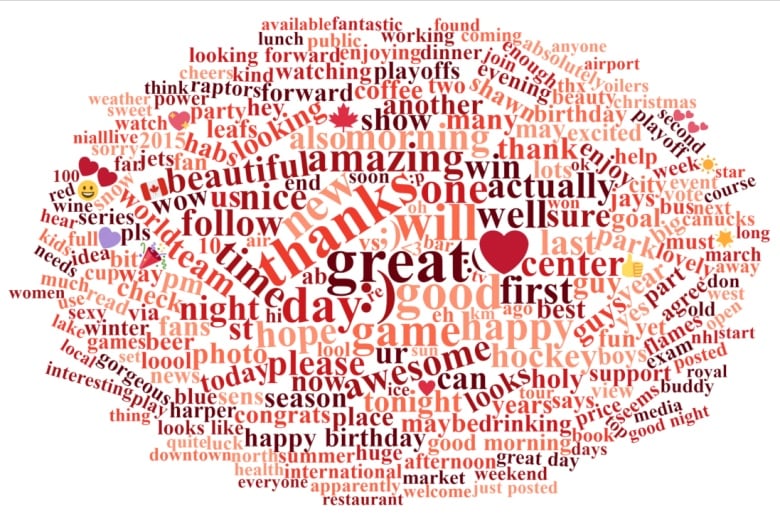 The researchers created word clouds of their findings to highlight some of the words, emoticons and emojis Canadians use more than Americans. (Bryor Snefjella and Daniel Schmidtke)

But across the U.S. border, the words used take a turn.

“You’re talking about words like ‘hate,’Â lots of slang, ‘bro,’ ‘brah’Â and net-speak. ‘Hurt’ comes out as an American word, lots of negative, bad stuff and lots of words you wouldn’t want to say in front of your grandma.”

The study also revealed some interesting points when it comes to emojis and emoticons.

SnefjellaÂ said Americans tend to use more emojisÂ â tops picks including the face crying tears of joy, skull and face with hearts for eyesÂ â while Canadians tend to spell out their smiley faces using punctuation :).

Meanwhile, theÂ emojisÂ Canadians do use are also overwhelmingly positive and include the heart, party horn and maple leaf.

A ‘tiny fraction’ of Trump

The work follows a similar study SnefjellaÂ and his co-author DanielÂ SchmidtkeÂ completed in 2016, which looked at three million tweets from both countries.

This time around the tweets the team analyzed were all posted between February 2015 and February 2016. The country of origin for each post was confirmed usingÂ GPSÂ coordinates.

In recent years, Twitter has become one of the most popular social media platforms and a tool for politicians and members of the public to interact.

U.S. President Donald Trump is amongÂ the most prolific and high-profile Twitter users today and it seemsÂ not even the study could escape his influence,Â even though he wasn’t yet elected when the data was being collected.

“Interestingly he is one of the only celebrities who didn’t turn theÂ GPSÂ feature on his phone off,” saidÂ SnefjellaÂ who explained Trump’s account popped up while researchers were reviewing some of the most retweeted posts in their data.

SnefjellaÂ said he and his fellow researchers,Â Schmidtke and Victor Kuperman, didn’t set out to examine national stereotypes.

He noted social psychology studies surveying large numbers of Canadians and AmericansÂ have consistently shown national stereotypes are not accurate and have notÂ provided any hard evidence the average citizen of either country hasÂ different personality traits than the other. 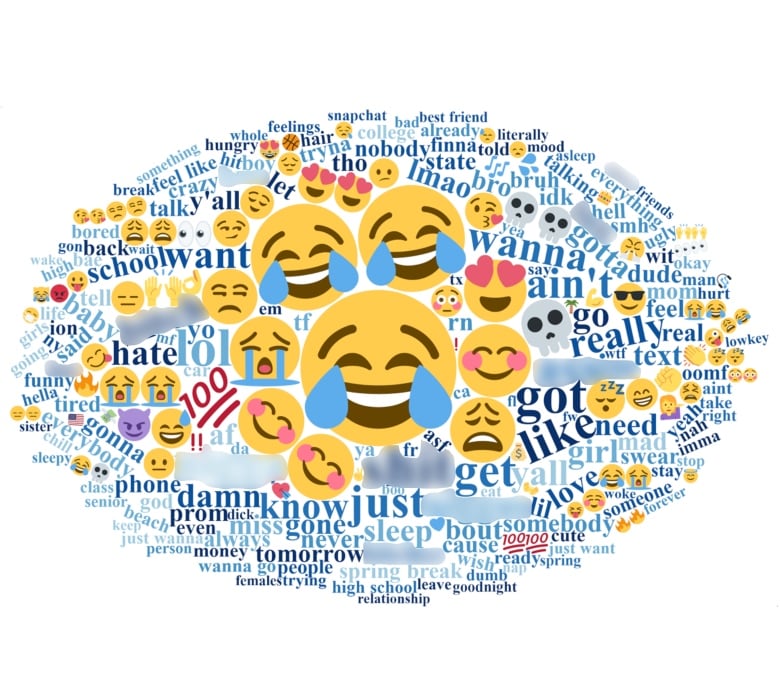 The word cloud for American Twitter users includes far more emojis and blanked out words Snefjella says you wouldn’t want to use in front of your grandmother. (Bryor Snefjella, Daniel Schmidtke)

Instead, the team believes their workÂ indicates that when Canadians and Americans take to Twitter they’re essentially creating their national characters through the words they type.

“Maybe it says being Canadian is something we do and one way we do it is through our language choices,” said Snefjella.

“Don’t just look at study and say ‘Ah, of course, Canadians talk nice because they’re nice and Americans talk rudely because they’re rude.’ We’re saying exactly not that. What we’re arguing for is the possibility of an identity construction strategy through language.”

Post Views: 454
Want To Change Your Life? Start Earning Up To $5,000 Per Week After Watching This Video. Click Here!
Related Topics:
Up Next